I’m pleased to announce that a new version of Poedit is available for download right now. There’s the usual assortment of small improvements all over the app, but a few new features in particular are worth highlighting:

Many Poedit users asked, time and time again, for a way to collaborate on translations and split the work between two or more translators more easily. Some used elaborate workarounds that involved sorting the files in just the right way or tagging progress with bookmarks and wished for a better way.

Poedit 1.8 delivers just that with its new integration of the excellent Crowdin localization platform (Poedit itself uses it to manage translations). You can now open files from Crowdin projects directly within Poedit and know they are at their latest version.

You don’t even need network access once you opened the translation in Poedit and can continue working on it offline, while commuting for example. When you’re done with it, syncing your changes back to the Crowdin project takes just one click of a button.

Online suggestions are now faster. Poedit can predict your movement over the PO file as you write new translations (especially if you use the Go menu shortcuts) and can intelligently pre-fetch the suggestions. In many cases, the wait for suggestions to load is completely eliminated and they appear instantly the moment you move to the next string.

Poedit always focused on editing just the PO files with translations and didn’t have good support for working with PO Templates (POT) – something of interest mostly to developers. Starting with 1.8, you can edit POT files, update them from sources or create new translations from them.

WordPress support was extended to support POTs as well, including extractions of theme and plugin metadata from WP headers in the same way makepot.php does.

Replace is another long-standing omission that 1.8 fixes.

This part got a facelift as well. You can now drag folders or files over and drop them on the list or choose them in a file open window. 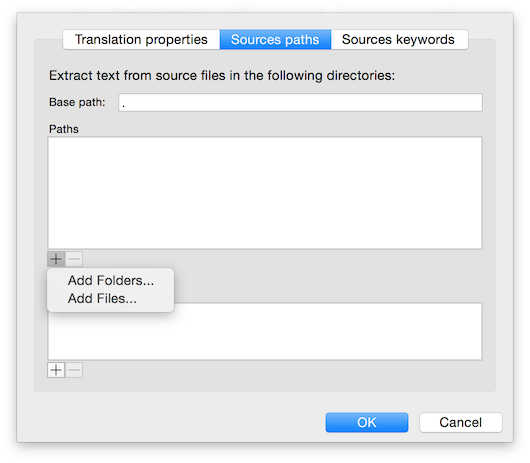 Gettext translation system was always meant for use with English as the source language, but it’s sometimes used with other languagues such as German. Poedit now works much better in this situation and correctly shows approprite TM and online suggestions.